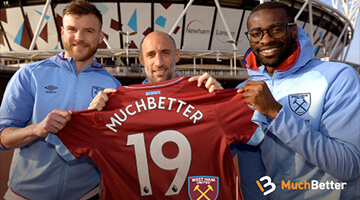 After affiliating with the famed poker player Lex Veldhuis, MuchBetter team shows no signs of slowing down to catch their breath – quite the contrary. Only weeks after hiring Veldhuis as a brand ambassador, the company has proudly announced its partnership with West Ham United Football Club, aka the Hammers.

The new business association is expected to open many doors for MuchBetter, which has been steadily acquiring the leading position among the most renowned payment service providers.

According to the new deal, MuchBetter is to benefit from a range of branding opportunities, including advertising at the London Stadium. The exposure is expected to generate a large volume of new users who are looking for a reliable and sophisticated payment method – just the kind that MuchBetter strives to deliver.

The publicity that the company will get from their association with multiple FA Cup winners is priceless, which is why MuchBetter decided to spread some joy and take one West Ham supporter to Shanghai, where the club is scheduled to play against Manchester City, Wolverhampton Wanderers, or Newcastle United.

West Ham is equally excited about their affiliation with MuchBetter; the club’s Digital & Commercial Director has expressed his delight about working closely with the young and perspective payment service provider: “MuchBetter are an extremely exciting company with innovation at the heart of everything they do, which absolutely resonates with our approach too. We are looking forward to working closely with them on improving and enhancing our fans’ experiences through their technology and services.”

The beginning of 2019 has set quite a few milestones for the company, gradually setting the pace for its upcoming market expansion.

West Ham United is a Premier League football club, founded in 1895 as Thames Ironworks; the name was changed in 1900 when the club was officially registered as West Ham United. In 1991, West Ham United F.C. Women was established, currently operating under the management of Jack Sullivan (son of David Sullivan, the owner of West Ham).

West Ham has never been below the 2nd tier of English football and they’ve reached the highest rank (up to date) in 1986, positioning on the 3rd place in the First Division. In 2017 – 2018, the club landed on the 13th position.