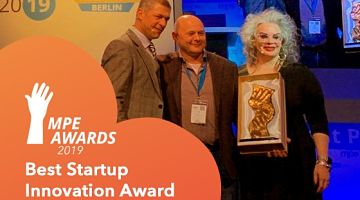 Good news from MuchBetter headquarters – the company is proud to announce to be one of the winners at the Merchant Payments Ecosystem Awards 2019.

While not the first ever award that MuchBetter received, it certainly is one of the most prestigious acknowledgements for its work in the industry since its inception.

Held at the InterContinental Hotel in Berlin from February 19th to 21st, the Merchant Payments Ecosystem Awards (MPE Awards) formed part of the 12th annual MPE 2019 conference and exhibition.

The ceremony was accompanied by a Gala Dinner, during which the award winners were announced, attended by 1,000+ MPE conference participants. MuchBetter took home the Best Startup Innovation Award in front of shortlisted companies such as Konsentus, MyGini and Token.

Apart from getting deserved recognition and prestige, MuchBetter will benefit from the latest MPE award (the company’s third major industry award) through a separate PR campaign and social media coverage performed by Merchant Payments Ecosystem.

The judges at the MPE Awards 2019 consisted of respectable chairmen, CEOs, MDs and directors of various leading industry companies. Awards were given in 11 categories and there were 2 groups with a different voting/judging process.

The Judge’s Choice Award featured 10 categories, whereas the MPE Influencer of the Year award was the only one given according to the people’s choice (determined via public online voting).

Natalia Ivanis, Head of Marketing & Media Partnership at EmpiriaGroup, the company that is behind the organisation of the MPE conferences directed her congratulations to all the winners and nominees at the MPE 2019 Awards.

MuchBetter co-founder, Jens Bade, admitted that they’ve really wanted to be triumphant at the MPE Awards this year and stand beside past winners, also great companies. Bader remarked that MuchBetter may need to build a bigger trophy cabinet soon, due to continuing rewards and recognition for the firm.

The Merchant Payments Ecosystem Awards were first held in 2010. Looking to honour all the companies, brands and individuals that help move the industry forward, MPE Awards was the first European awards event to bright together alternative payments, merchant services, POS, mobile and online payment systems under one roof.