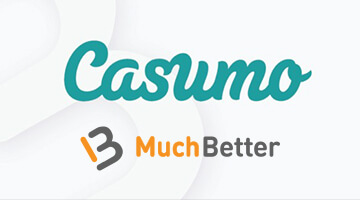 MuchBetter continues to strike new deals with reputable iGaming providers and operators. It is confirmed that Casumo is one of them.

As of now, Casumo customers will be able to benefit from the MuchBetterinstant deposit and payout options. Casumo Casino has been searching a payment method that would lift conversions, and by the looks of it, they’ve found just the right solution in MuchBetter.

Casumo successfully offers its users a better reality through play. The site has an outer space theme and a terrific, modern design to match. It has been providing more than 800 casino games to punters since 2012, while sporting licenses by the UKGC, MGA and SGA.

Casumo is focused on maintaining an interactive, dynamic platform, one that will engage players with challenges and adventures. The list of payment options is fairly standard, but the operator has taken steps to expand it and give players a wider range of options.

As they’ve opted for MuchBetter, the Casumo team will experience lower transaction costs. The iGaming payments company will apply their one-of-a-kind commerce policy – they will only charge fees based on each player’s net balance over a month.

More Efficient Depositing and Cashing Out

Players will enjoy the possibility of instantly moving money at Casumo as depositing and cashing out will be facilitated and made more efficient. Security won’t suffer on account of fast transactions. Users will manage their MuchBetter accounts on smartphones and access them via fingerprint ID. The registration process, for those who are new to MuchBetter, will be speedy at the least. For added security, there is an in-app know your customer (KYC) authentication feature.

Quick registration and easy payments contribute to what Casumo has been hoping to achieve. The MuchBetter app will conduct minute-long registrations and instant payments. Due to fast access to real money wagers, Casumo players will be less likely to drop out, hence improved conversion on the horizon.

MuchBetter co-founder Jens Bader is happy to conclude another high-profile deal with Casumo and proud that the company’s payment solution meets the requirements of a brand with such a splendid reputation in the business.

Before joining Casumo, MuchBetter initiated collaborations with 888Casino, as well as Royal Panda. One of the highlights of its triumphant run has also certainly been teaming up with the Stars Group and its flagship brand, PokerStars. On a similar note, MuchBetter has also recently launched their fully managed solution Bank-in-a-box, giving additional control over user’s experience while making payments to selected operators.