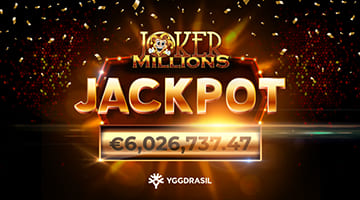 A lucky NordicBet player from Finland has kick-started the year majestically by receiving a hefty sum of €6,026,737. He landed a whopping amount playing Yggdrasil’s enormously popular progressive jackpot game Joker Millions. The player grabbed the loot while playing the game on his mobile phone on January 2, 2022. After spinning the reels for a while, he managed to land a life-changing win. Triggering a massive jackpot, he became another winner in the series of lucky ones that keeps going on.

The total sum received in 2021 coming from local jackpots was €39,924,077.04, with the latest outstanding win starting the year phenomenally. Joker Millions is a classic game in a growing portfolio of progressive jackpots from Yggdrasil’s workshop. The other popular titles in the library include Jackpot Express, Holmes and the Stolen Stones, Jackpot Raiders and Frost Queen Jackpots. The games like Empire Fortune, Ozwin Jackpots, Dr Fortuno, Atlantean GigaRise and Jackpot Express are also fan favorites. All of them offer lucrative awards and generous payouts to their players.

After such a great start to the year, it will be exciting to witness what else 2022 has prepared for the customers. The company representatives have already offered their warm congratulations to the lucky winner, expressing pleasure to host his fateful spin. They expect this is only the beginning regarding lucrative jackpots for their players. It is always thrilling to see such massive wins, and they are sure it will reach new players and bring them to the venue.

Yggdrasil is a company with a big tradition of giving to its players. Since its beginning in 2013, it has always attracted players, becoming one of the most respected providers in the industry. The company’s scalable business model encompasses three verticals, including table games, bingo and slots. Moreover, its business verticals include Yggdrasil White Label Studios, Yggdrasil Dragons and YGS Masters. Focusing on state-of-the-art technology, innovation and high quality, the enterprise has become one of the most reliable suppliers in the field.

The provider’s and the host company’s officials have already voiced their happiness over the big win. They hope this is only the beginning that will bring their players many more payouts. Stuart McCarthy, Head of Games at Yggdrasil, has said their first progressive jackpot slot has proven generous once more, granting a fantastic win. The company has found a winning formula combining the success of the old favorites and the newer jackpot titles.

Furthermore, Paul Malt, the representative of the Betsson Group, has extended his congratulations to the lucky winner. He could not hide his excitement over the win, stating it was a good start but hoping for more. There are numerous jackpot slots where players will test their luck, and he hopes this win is not the last one.