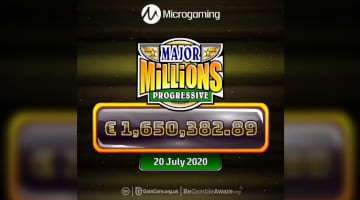 On July 20, one lucky player hit an enormous jackpot on Major Millions online slot. This happy punter won an astonishing €1,650,382.89! The amount itself is fascinating, however even more shocking is the fact that this is the third time this year Major Millions has yielded such an impressive payout!

This popular Microgaming game has already cheered up three gamblers with a seven-figure sum, making 2020 their luckiest year yet.

Another huge prize was paid out in June when the super-exciting game once again “spilt out” more than a million, exactly €1,203,349.99 in total.

Finally, the third big slam-dunk had happened this March when Major Millions online jackpot awarded €1,650,910.31. All these wins allowed Microgaming to pride themselves on their progressive jackpot network, saying they proved to boast the largest such network in the industry.

With so many prizes worth millions, Major Millions has deserved its place on the throne among the most successful progressive online slot games in the market now. Microgaming had created the army-themed online progressive jackpot game that features 5 reels, 3 rows, and 15 paylines. If you want to hit the progressive, you need to place the maximum bet and cover all paylines.

The game was launched back in 2000 and it now features two variants. Besides the 5×3 reels type, there is also the one with 3 reels, 3 rows, and 3 paylines. Both versions are similar when it comes to gameplay. However, with the 3-reel classic Major Millions slot, you can only win the jackpot by spinning three Wild symbols on the third payline.

As a military-themed game, it is no wonder to see many army-related symbols spinning in front of the gamer. Some of the symbols are major’s cap, medals, envelope, binoculars, a bomber plane, and a warship.

However, the most important symbol is Wild – a Major Millions Progressive logo. The crucial thing about Major Millions Wild is to land it on the 15th payline. If you manage to do so, you’ll end up banking the massive Progressive Jackpot prize! As many already did!

About Microgaming and Their Progressive Jackpot Network

Microgaming is an award-winning gaming software vendor for online casinos. It is also one of the most popular software providers in numerous online casinos worldwide.

Besides the online casino staples offer, Microgaming is also an innovator, pioneering in virtual and wearable gaming. As a well-known industry player, Microgaming releases monthly an impressive collection of games, that are becoming popular among players across the globe.

With so many wins on just one slot game, they proudly announce they are the home of the world’s largest progressive jackpot network. Their network has already paid out over a billion euros to date.

If you feel lucky today, why not try Major Millions at Wishmaker Casino, for example? Or find your own best fit. Good luck!