Blueprint’s Master of Atlantis Exclusively on Casumo Until Mid-June 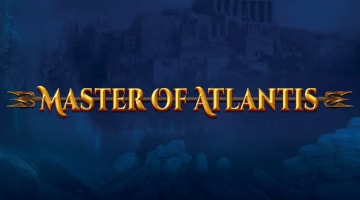 Blueprint Gaming recently released a brand new slot, called Master of Atlantis and the good people of Casumo Casino succeeded in making a deal with Blueprint so that the 2019 release can only be played at Casumo Casino for the next three months! So, if you want to try out the five-reel, 40-payline slot these days, you will have to visit Casumo!

What can You Expect in the Master of Atlantis Video Slot?

The ruler of the seas will welcome you at the gates of the lost city of Atlantis once you start spinning the reels of the 2019 release. Poseidon will be your host and will use his powers to help you land big wins and trigger several exciting features.

The 2019 release features five reels, three rows and benefits from 40 fixed paylines, which pay left to right, starting from the leftmost reel. Three of a kind is the minimum for landing payouts. Only the Logo, Shark and Octopus will also pay for two of a kind. Gamers can bet as low as £0.50 and as high as £100 per spin.

There is the Trident Strike feature, which is triggered randomly and can occur on any spin. The Trident will land and turn a certain number of symbols into Mystery symbols. Land three or more Poseidon Scatters to trigger the Poseidon Free Spins feature.

All of this and much more is waiting for you in the lost city of Atlantis, so visit Casumo Casino these days to check out Blueprint Gaming’s latest release, Master of Atlantis.