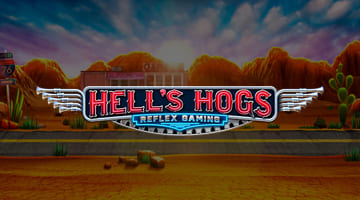 Watch for the sparks on the road as the engines roar, for Yggdrasil and Reflex Gaming have teamed up for a game. The two providers have developed a motorbike extravaganza, Hell’s Hogs, an epic fast-paced slot. Watch the fury unleashed with the Swinehouse Brothers, Stud, Streaky and Smokey. They cruise the highways in this potentially lucrative five-reel slot. It has a maximum win of 10,136x the stake, giving numerous winning opportunities to the lucky punters. The three exciting Bonus options open multiple possibilities for the players.

The Piggy in the Middle Bonus will make three hogs ride onto the grid, with the one in the middle having three Multipliers. They include Double Up, Pay All and Boost, increasing the payouts. The first one doubles the winnings, the second pays all Multiplier values, and the third enhances the prizes up to 42x the bet. Other hogs carry random Multipliers or cash prizes, and you can collect random awards until you hit the Stop sign. In addition, Biker Bash is a Free Spins Bonus with an incrementing Multiplier, starting at ten spins with an x1 value.

Every spin increases the Multiplier by x1, with the possibility of retriggering the Bonus. The Multiplier can grow up to x30, offering numerous lucrative chances. Moreover, the third Bonus is called Wild Journey and gives five free spins, with tremendous Wilds bringing players more chills and thrills. However, that’s not all. You can land the “Chop Store“ symbols throughout the base game, the shop will open, and you will see a reel image. Every one of them might match for new amounts to boost your winnings. The notorious gang comes straight out of the forties to recruit you, but a biker’s life can be perilous.

Hell’s Hogs is the latest release from Yggdrasil through the YG Masters program, with the provider’s cutting-edge expertise. Allowing partners to utilize the regulation-ready standardized toolkit to provide top-class content material enables the business to grow fast. Surprisingly for the theme, Hell’s Hogs is a low-volatility game with an RTP of 95.6%. Still, there are many opportunities to win big, for the maximum win is excellent, and the Bonuses are exciting. Albeit it will not be as thrilling as one might expect, Hell’s Hogs will provide a memorable playing experience.

One Hell of a Ride

The company officials have great expectations from the game, already voicing their excitement. Stuart McCarthy, Head of Product & Application at Yggdrasil, has noted Hell’s Hogs is one of the year’s quirkiest slots. The esteemed enterprise is confident punters will adore this game and everything it provides. Furthermore, Mat Ingram, CPO at Reflex Gaming, has stated the game is a beautiful journey. Thanks to the three Bonuses and the Chop Store symbols, it is a fascinating experience. Pigs have never been used in a slot game in such a manner.