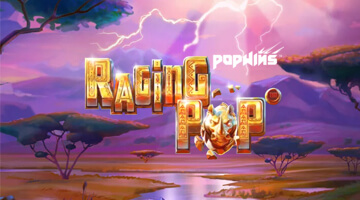 Yggdrasil, an iGaming behemoth, has partnered with AvatarUX to develop an African adventure that will delight the fans. RagingPop brings a majestic playing experience that will keep players on edge. This game has a top-rated PopWins mechanic, giving every spin a new thrill. It has straightforward gameplay with a Golden Rhino as a lucrative high-pay icon that pays for two symbols on a line. Numerous winning opportunities are in store for the lucky and patient players brave enough to embark on this journey. RagingPop is an attractive release gamers will not forget easily.

The Raging Reel feature can be triggered on each spin, letting Rhinos wreak havoc on the screen. They raise reel height and add Multipliers to grant lucrative amounts up to 500x the stake. Additionally, reels can be six icons high through the popping wins in the base game. In the Bonus round, they can rise to seven for an enhanced win potential, with exciting moments and sequences all the time. The game never loses its grip, with many African dangers lurking around the corner. It puts you in the middle of the action, where hunting for treasure brings an unforgettable experience.

New possibilities open in the Bonus round, activated by landing three Scatters anywhere on the board. When you enter the round, it triggers a multi-stage Gamble feature, where one can spin a Gamble Wheel. If the spin is successful, players receive extra free spins up to thirty. Continuous reel growth is active during the Free Spins round, with reels growing after every ten spins. The procedure repeats until reels reach the maximum height, increasing wins in the process. Triggering hefty wins might not be a stroll through the park, but the possibility will attract many players to try.

RagingPop is powered by GATI, Yggdrasil’s cutting-edge technology, allowing partners to utilize the standardized development toolkit to produce first-class content. There is plenty to hope for, with the betting range for modest players and high rollers alike. The maximum win of 20,000x the stake will lure numerous gamers into checking the game out. Those who manage to get by inside the deep savannah will have the chance to grab big wins. RagingPop has deservedly drawn a lot of interest from the players, and the initial reactions are fantastic.

The company officials have great expectations from the title, voicing their excitement about the release. AvatarUX’s CEO, Nicola Longmuir, has noted this game is a fantastic addition to its game library. Yggdrasil has a broad operator network, and they are excited to launch the game across it. RagingPop is a milestone achievement for the enterprise, and they cannot wait to see the public’s reactions. Moreover, Stuart McCarthy, Yggdrasil’s Head of Product and Programs, has said the partnership is phenomenal, bringing innovative content to players worldwide. They are impatient to see how the latest PopWins game will be received.