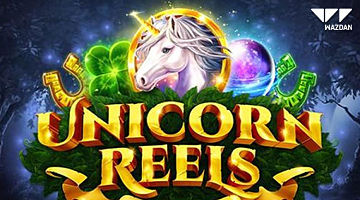 Wazdan, a Malta-based online casino games specialist, revealed the brand new magical slot ideal for those who believe in fantasy and mysteries. The new title features legendary Unicorn, a symbol of joy and positivity.

However, the game is far from being developed only for fantasy lovers. Unicorn Reels with Hold the Jackpot feature appeals to all players seeking to hit the jackpot, even if it requires chasing a few Unicorns.

Unicorn Reels is a 5-reel, 10-paylines slot with an RTP of 96.14%. The game will take you deep into an enchanted forest in a quest for mythical and fantasy creatures that hide attractive bonuses and huge jackpots.

You need to catch at least five Unicorns on any of the spins to trigger a bonus feature rewarding attractive wins. Unicorn Jackpot Game transforms the layout into a 5×5 grid with 25 fields, rewarding three re-spins for gamers to collect as many Unicorns as possible. When a player receives a Unicorn symbol, the re-spin counter will reset to allow the player to get a higher reward.

After you manage to collect 15 or 20 Unicorns, the symbols hit Minor and Major Jackpots, respectively. The lucky gamer who gathers all 25 Unicorns will enjoy the Grand Jackpot that can reward the highest win, up to 1,000x the stake.

The game also has several Scatters that increase players’ chances of winning outside paylines. Also, Wilds are there to change any symbol to help create winning combinations. Of course, both Scatters and Wilds are the most attractive and highest paying symbols in the game everyone awaits.

Other unique Wazdan features alongside Hold the Jackpot Feature include Big Screen Mode, Ultra Fast Mode, and Ultra Light Mode, while game volatility varies between low to high. These features allow players to personalize the games and enjoy the tailor-made, immersive game. Another perk is that the game enables you to skip waiting for a bonus jackpot round. You can easily purchase the Unicorn Jackpot and trigger it anytime you want using Buy Feature.

And finally, Unicorn Reels is a responsive game developed in HTML5 that allows it to work smoothly on all devices and operating systems (iOS, Android, Windows). Hence, you can chase the Unicorns whenever and wherever you want.

Commenting on the Latest Game Release

The Chief Commercial Officer at Wazdan, Andrzej Hyla, said that developing new creative games was in the company’s DNA right from the start. He also pointed out that they were more than happy with the new Unicorn Reel slot that further enriched their fast-growing games library.

Moreover, he added that this fairytale-themed slot would inspire players to hunt for the magical creatures that would reward the efforts with a chance to win the Grand Jackpot.