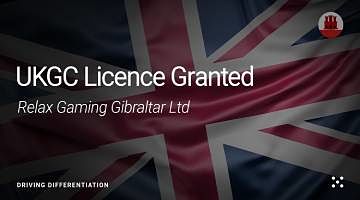 Relax Gaming, one of the leading casino content providers and iGaming aggregators, has announced the great news. The company’s subsidiary, Relax Gaming Gibraltar Ltd, has officially received the UKGC license.

The latest recognition will push the company further and drive future expansion in one of the most attractive gaming markets in the world.

Getting a license from one of the most respectful gaming regulatory bodies in the world is a big deal. Such recognition proves that Relax Gaming produces quality content and abides by the most stringent online gaming rules. In other words, Relax Gaming is providing a trustworthy and fair gaming experience to all gamers who like to enjoy their engaging titles.

Furthermore, the company has also managed to reach another important milestone in its global growth. It has successfully transferred 32Red, BetVictor, and Boylesports operators to Relax Gaming’s Gibraltar network. The company has outlined that sports betting and gaming group Entain plc’s brands Coral and  Ladbrokes are next to do the same.

Relax Gaming boasts several other notable certificates. UKGC license follows the B2B approval from the Gibraltar Licensing Authority granted in October 2020. The company also has the Malta Gaming Authority seal of approval and a Romanian National Gaming Office license. It means that the casino content supplier gathers trustworthy recognitions, allowing them to spread its reach to important regulated markets. One of the key markets where Relax Gaming is strengthening its position is the Nordic region, notable for its discerning player base.

Relax Gaming worked hard in the past few months to link up with several reputable gaming studios and casino content developers. The company recently struck a partnership deal with OneTouch to integrate its top-notch suite of games into Relax Gaming Platform. It also bolstered its presence in the Romanian market by inking an agreement with Romanian operator MagicJackpot. The latest partnership allows Relax Gaming to offer its entire portfolio of high-quality proprietary games to gamers in Romania.

Commenting on the New UKGC License

CEO of Relax Gaming, Tommi Maijala, said that the UK Gaming Commission license granted to their Gibraltar branch was another major commercial step forward for Relax Gaming. He also added that he was sure that both Relax Gaming and all its partners would benefit from the new license. Finally, he pointed out that the UKGC seal of approval represented a fresh opportunity in the company’s urge to develop and deliver top-class games across all regulated markets.

Relax Gaming was founded in 2000 and has since managed to build an enviable reputation as one of the leading B2B suppliers. The company provides its partners with an award-winning portfolio of 2,000+ high-quality games. Besides casino games developed 100% in-house, Relax Gaming is a notable content aggregator famous for its Silver Bullet and Power By Relax partnership programs.