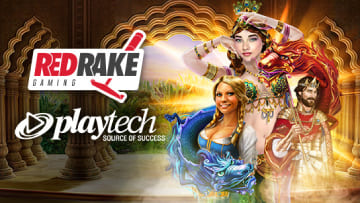 The latest cooperation will help Red Rake Gaming to benefit from Playtech’s distribution network by gaining exposure to its vast international customer base in regulated markets. In other words, the newly established partnership will enable Red Rake to get its content in front of players from some of the hottest operators and brands across the most competitive regulated jurisdictions.

Playtech Game Marketplace pride itself on its many licenses, operators, and the number of games it hosts. The platform holds more than 150 licenses, features a portfolio of 2,000+ games, and offers its content to almost 30 regulated markets. Such a “pedigree” makes it one of the leading iGaming one-stop shop for casino content discovery. And on top of that, the platform allows its studios to access Playtech’s worldwide distribution network to promote their games.

With such an enviable background, Rade Rake Gaming had no doubts if they should join the ranks of some of the most famous casino content providers that already teamed up with Playtech. With more than 700 in-house and premium casino titles, Playtech Games Marketplace has become the industry’s leading content provider. Furthermore, the company is dedicated to driving innovation across all key industry verticals, including retail, online, and land-based casino providers.

Playtech’s cross-platform with a rich product suite allows players to access both server-based and mobile games through a single account.

Nick Barr, managing director for Red Rake Malta, stated that collaboration with Playtech was a significant achievement for Red Rake Gaming. The new partnership will enable the studio to enhance its reach into important markets with iGaming regulations in place. At the same time, Nick Barr added that Red Rake’s library of top-performing content would further bolster Playtech’s offering.

Playtech is one of the best-known casino content providers and distributors. As a result, bringing fresh content from Red Rake Gaming on board will be highly praised among its many casino partners. Finally, Nick Barr added that the company was looking forward to working with Playtech and delivering its engaging casino content across the globe.

James Frendo from Playtech also said that the company was delighted to have been able to expand its catalog with top-performing games from one of the reputable game studios such as Red Rake. He also added that the seamless integration with Playtech Games Marketplace would help the developer quickly and easily showcase its compelling content worldwide.

Finally, James Frendo noted that Playtech was confident that Red Rake Gaming’s exciting game library would become a massive hit among operators and players across the globe.