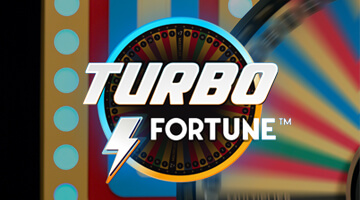 Ever since Real Dealer Studios entered the iGaming scene, this innovative casino content provider has been pushing the boundaries. The creative system of combining classic casino table games with Holywood-style cinematography has proved to be a huge success. The groundbreaking approach of producing live casino-like games powered by RNG gives Evolution’s First Person game range a run for their money.

This time, Real Dealer Studios showcases a new fast-paced Turbo Fortune game, the latest addition to their popular Fortune Finder game range. The new title is perfect for casino players who like speedy gameplay boosting the adrenalin rush and excitement.

As the name hints, Turbo Fortune is a high-speed version of the players’ favourite money-wheel game, Fortune Finder. The new take on the beloved game show features a similar style and atmosphere, including thrilling multiplier rounds. The game is inspired by well-known TV game shows from the 1980s, featuring recognizable aesthetics of that time. The studio is flashy and colourful, adding to the overall stellar experience. The gameplay action is shot and edited by professionals, ensuring a top-quality Holywood-like look and feel.

Turbo Fortune doesn’t have a live host like Fortune Finder. Instead, the game focuses entirely on the action. It will offer a selection of quick betting options and enable autoplay functionality for continuous gameplay. The betting rounds will be shorter, allowing players to immerse themselves into the game without waiting for the next round to begin.

The most exciting features of the game are compound multipliers. These payot boosters are located on the dedicated fields on the wheel. When activated, they can increase the potential win during the next spin by 2x or 7x. Moreover, these multipliers can even stack up, providing a chance for massive Turbo Fortune wins.

Speeding Its Way into Casino Lobbies

Commenting on the latest turbo release, Chief Product Officer at Real Dealer Studios, Shane Cotter, says that the Fortune Finder lineup has already become a hit among players. With Turbo Fortune, the winning concept goes into the fast line.

In Cotter’s words, the studio is sure the latest version of the popular money-wheel game will become a success in an age when players’ time is a valuable commodity. Finally, he hopes to see brand new Turbo Fortune landing in many casino lobbies soon.

Ezugi, a prominent Evolution-owned brand, has added a new game to its Live game roster.…

NetEnt, an iGaming behemoth, celebrated ten years since the release of one of the industry’s…

Stakelogic, a highly reputable online casino content provider, and its Live department have launched their…

Play’n GO Launches in the US

Play’n GO, an iGaming industry behemoth, has entered the US market by obtaining a Michigan…

Unleash Your Party Animal in The Rave Slot by Nolimit City

After doing time in Folsom Prison, Nolimit City has decided to take some time off…

Quetzalcoatl was one of the most powerful deities worshipped by early Latin American civilisations. The…

Play’n GO Launches in the US

Unleash Your Party Animal in The Rave Slot by Nolimit City