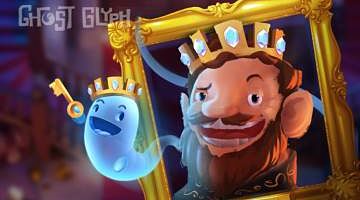 Would you be brave enough to enter into a ghost haunted house to win some prizes? If the answer is yes, then you are in the right place at the right time!

Quickspin, the Swedish creative game development studio, releases today its thirds cluster slot title, Ghost Glyph. With the Haloween just around the corner, Quickspin hit the jackpot by launching it in just the right moment!

Ghost Glyph is an exciting, feature-packed second chapter in the Glyph series, based on the already successful game mechanics of Golden Glyph, a title that offered new options in both the base and bonus game.

Ghost Glyph is a colorful, fun game, full of quirky hidden ghosts, that will glue your attention to the screen for quite some time.

This cluster-pay slot brings tons of fresh, exciting options in both the main game and bonus rounds. The maximum exposure and moderate volatility make this game well-balanced, capable of equating the wins during the main game while allowing some fantastic prizes in the bonus game!

The game is a 7×7 cluster-pay slot with numerous new surprising features. This new chapter of the Golden Glyph’s takes its innovative mechanics to a whole new level, enhancing the game with medium volatility, 31% hit rate in the base game, and a chance of winning up to 2000x!

Tumble Mechanics is what makes Ghost Glyph so exciting. This feature is present in both the main and bonus game. Tumble Mechanics remove the winning cluster of symbols, making room for new ones to appear and, in this way, add new wins to the previous one. Tumbling will stop when there are no winning clusters left.

The next feature, named after the game, is the Ghost Glyph. The feature is activated in the base game and the Freespins Bonus round. When the winning cluster is removed, the Ghost Glyph will appear in one of the empty spaces before the next tumble, becoming a part of the winning combo. Each Ghost Glyph is evaluated and removed as a Wild that activates new Ghost Urn. If the Blue Ghost Urn appears, all Ghost Glyphs that were left unused will be transformed into Wild.

Before each round, Ghost Urns are activated from left to right, and each has a different set of options that makes the game very exciting as you never know what will happen next.

Five Ghost Urns appear randomly. The final urn is always the Blue Ghost Urn. Besides the blue one, there are Green Ghost Urn, Red Ghost Urn, and Yellow Ghost Urn.

The red one targets one of the lowest paying symbols and removes it from the reels. The green urn changes these low paying symbols into other similar ones. And finally, the yellow urn spawns 4-10 randomly placed Wilds on the reels.

As the last one to be triggered, Blue Ghost Urn activates the bonus game or 3+ free spins.

Finally, there is the Massive Wild Feature activated at the end of the free spins. Massive Wild is initiated if the last Paranormality Meter reaches level 1 or higher. Just to let you know, there are 22 levels in total!

Their offer includes video slots, a Quickspin platform, and many gamification tools bundled into the Quickspin Promote catalog that is available across all markets.