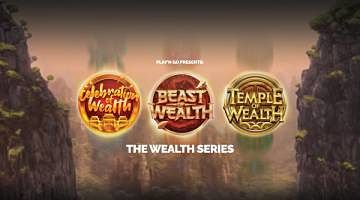 Play’n GO, one of the leading gaming solutions developers, rejoiced many when they announced they were releasing not one, but three new slot titles at once.

Combined in The Wealth Series, three games launched as one is most definitely a unique moment!

Each of these three games features different prosperity characteristics, and each promotes a distinct symbol of wealth and well-being.

The Features of Wealth

The Wealth Series comprises three Asian-styled games that look similar and share many more extras in each one.

Beast of Wealth boasts much more classical looks, Celebration of Wealth is more in an Asian festive spirit, while the Temple of Wealth has a more traditional Asian look. However, all three games share superb graphics and a classic Chinese soundtrack that helps evoke an authentic Asian vibe!

In the center of each game is the Golden Reel feature that is crucial for triggering the jackpot. There are four jackpot icons, Mini, Minor, Major, and Grand. You need to match three symbols to claim a jackpot.

Each of the three games has its own free spins mode that enables players to decide how they want to play this feature. Interestingly, these games are not only connected by a theme they share. What is more important is that they are tied by a progressive jackpot that grows as games progress.

There are four jackpot buckets, and if you are lucky enough to hit the jackpot, one of them will bring you some luck!

As Play’n GO is already well known for its pioneering efforts and solutions, a decision to launch three instead of one game came as no big surprise.

The Wealth Series went live simultaneously across various countries. CEO Johan Törnqvist explained this was an exciting new moment in the company’s history, as they were always striving to push the limits and provide the best entertainment ever.