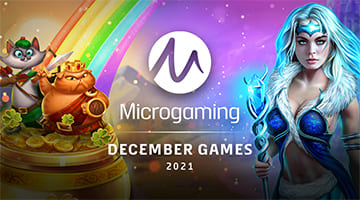 Microgaming, an iGaming behemoth and industry leader, will finish the year by releasing a host of appealing games. The exciting lineup of new titles will delight the fans expecting big wins during the holiday season. There are numerous thrilling releases set to enthral their impatient customers.

The powerful provider will mark the festive season with a pack of attractive titles. Let’s see what is in store for the players ready to get their hands on loot.

Snowborn Games will treat its fans with the feline-friendly title, Cat Clans, a game with a rich list of features. Join the Clan Mac Cattus and use the sticky Wilds, Multiplier Wilds and Cat-a-Pult free spins to grab the maximum win of 20,000x the stake. Collect the precious golden paws during the Clan Battle Bonus to help your clan win the top prize. If you are a cat person and a slot enthusiast, this is the game for you.

Gong Gaming Technologies has prepared an epic fight in Empire Shields, where you can trigger a double reel. Expanding Wilds, Multipliers, and Extra Wilds can activate to bring you massive payouts. Each spin makes the shields on the Topper move, providing you with new ways to grab hefty wins.

Another seasonal slot arrives with Book of Mrs Claus from Aurunum Signature Studios. Share the joy of holidays by utilizing the expanding symbols during the Bonus round. You can also respin individual reels for an opportunity to score more wins.

Embark on a mythical adventure with Links of Ra, where sci-fi meets Ancient Egypt. Slingshot Studios has developed a richly designed slot going back to the time of Anubis, Ra and Sobek. The generous Link&Win mechanic with jackpots and cash prizes, super-stacked symbols of Gods and free spins are among its features.

Pulse 8 Studios has released Fortune Rush, where the Rush icon triggers a respin when three or more appear. A high symbol is randomly selected, and after three respins, you can win big with Lucky Draw.

Some of the most expensive holiday gifts may come from Just For The Win’s Plenty of Presents, with up to thirty initial free spins. Multiplier Wilds and a maximum win of 25,000x are also up for grabs. Neon Valley Studios will add the chill to the air with Arctic Enchantress, featuring the Link&Win mechanics, portrait Wilds, free spins, and 243 paylines. Feel the power of Win Booster when placing an orb in the tiara to enhance the possibility of triggering the Link&Win feature.

The list is not complete without such titles as Space Invaders, Pirate Pays Megaways, Snow Scratchers and many other games. They will make your holidays more lucrative and festive than ever.