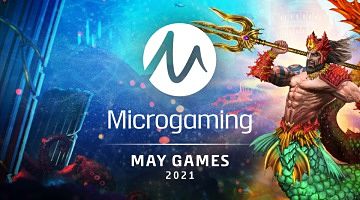 Microgaming, the world-renowned iGaming content provider, has just released a brand new list of casino games ready to hit online casino floors in May. Jungle, sea, and sand, with a few classics, are the main themes to power new Microgaming slots this month.

Get Ready for an Exciting Month

Each month, avid Microgaming fans eagerly await to hear what new “delicious” titles Microgaming has prepared for them. Luckily, Microgaming regularly updates its vast portfolio with new releases from various top-tier casino content suppliers. This May is no different. So, let’s see what cool games are coming out from Microgaming’s creative kitchen this month.

Microgaming is set to release a new game every week this month. The first game that has already opened the month of slots galore is a safari-themed Serengeti Gold from Just For The Win studio. The game was released on May 4, bringing us African wildlife such as lions, leopards, African buffalos, elephants, and rhinos. Serengeti Gold features Hyperhold respins, Static Jackpots, free spins with multipliers, and a possibility of winning a 2,500x Mega jackpot.

The next game in line is 10,000 Wishes by Alchemy Gaming, rolled out on May 6. The Arabian-themed game has a Wheel Bonus allowing you to hit the Mega jackpot of up to 10,000x the stake. Besides the Mega win, the game offers other attractive jackpots like Major (500x), Minor (50x), and Mini (15x).

Spin Play Games have developed a thrilling Atlantis Rising title set to be officially released today (May 11). The adventure-themed slot revives Atlantis, the legendary underwater city. The fantasy game is spiced up with Rising Wilds, free spins, and Wild Blasts. Joyful Joker Megaways from All41Studios is scheduled for May 18, bringing along the famous Megaways and Rolling Reels mechanics. Then, on May 20, you’ll be able to start enjoying a pirate-themed slot, Silver Seas, brought to you by Gold Coin Studios.

Finally, the icing on May’s cake will be Ancient Fortunes: Poseidon™ Megaways, scheduled for May 25. Again, the game will provide double excitement by combining Megaways technology with a thrilling Rolling Reels feature.

Microgaming has even more games in the pipeline for this month. One of them is a newly-remastered Mega Moolah Goddess, ready to launch on May 13. As the name implies, the game is part of record-breaking Microgaming’s Mega-Moolah progressive jackpot. The jackpot wheel offers a shot to win the Mega jackpot with prize pot seeding at €1 million.

Big Time Gaming also prepared an innovative title to showcase through Microgaming’s platform. King of Cats will be released on May 26. The slot offers a double-game system allowing you to select to play Lion or Puma game. Meanwhile, Golden Rock Studios prepared Book of Inti, an Incan-themed slot inspired by a patron deity Inti, the sun god worshipped in the Incan Empire.

Other thrilling games ready to heat up May include Scarab Gold (May 10), Cops’ n’ Robbers Megaways (May 20), and Risitas en Gansters.

In the end, let’s have a quick overview of Microgaming’s content aggregation platform and its latest additions. The number of independent studios offering their games through the platform is regularly growing. One of the latest brands joining the Microgaming roster of exclusive studios is GONG Gaming Technologies. Welcome, GONG. We look forward to seeing your games in action.