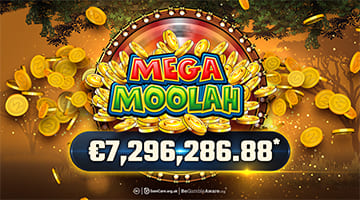 One of the most popular progressive jackpot slots, Mega Moolah, has granted its first multi-million award in 2022. The fortunate winner has scored a big win of €7,296,286.88 on February 6. It was the seventieth instantly made multi-millionaire, obtaining a whopping seven-figure amount and receiving it as a one-time payout.

Mega Moolah first debuted in 2006, springing into action as an online slot game, but is now a four-level progressive jackpot. The slot has a seed amount of €1m, and it has become an overnight sensation in the iGaming industry.

Landmark payouts and record-breaking wins have marked Mega Moolah’s 15-year history. It has fortified its position in the market over the years, becoming one of the most popular slots in the field. Firstly, it made history when it paid out a jaw-dropping €18.9m win in September 2018. The all-time record was short-lived, for it was broken in April 2021 by a whopping amount of €19.4m. The game that broke it was Absolootly Mad™: Mega Moolah, a welcome 2020 addition to the family of Mega Moolah slot games.

The Mega Moolah series currently consists of seven titles, while there are more on the progressive jackpot pipeline for 2022. It will undoubtedly appeal to millions of punters worldwide, expecting to be the following winners. Bringing lucrative payouts home has always been the purpose of gaming, and the popular franchise understands it well. It is anticipated Microgaming will still develop various games in the series as long as the public wants it. The latest enormous win will indubitably urge many players to try their luck with the lucrative slot.

The numbers speak for themselves, and it is easy to see why this slot behemoth is so prominent in the industry. The Mega Moolah slot franchise remains the most popular and massively played slot across the industry due to its more-than-handsome payouts. Players always believe they will be the next lucky winners and the big jackpot news invariably spark their interest. Numerous customers will impatiently wait for their chance to spin the reels and win big.

Starting the Year in Style

The latest win marks a fantastic start of the year for Microgaming, promising to remain on top with the Mega Moolah series. The iGaming icon has paid out more than 18.4m jackpots over the years, with a total of €919m. The officials have already expressed hope this is only the beginning. Andrew Clucas, CEO at Microgaming, congratulated the winner, saying he hoped that awarding huge wins would carry on for a long time.