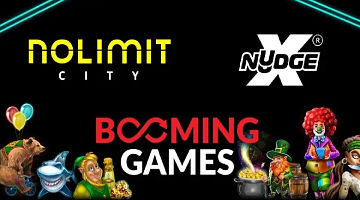 Booming Games has announced that they teamed up with Nolimit City to use their exclusive xNudge mechanic. The company has already premiered its first title featuring this unique engine.

“Sphinx Fortune Hold & Win” is a high volatility game with 576 ways to win, featuring a dynamic gaming interface with a unique 3-4-4-4-3 grid. The game has Nudging Wild Multipliers, Pyramid Hold, and Win Bonus.

Commenting on the new collaboration, Malcolm Mizzi from Nolimit City said they were pleased to work with other studios to promote the xNudge mechanic. He also said that the latest technology from Nolimit City was standing out from other engines for its powerful potential, delivering lots of entertainment. Mizzi added that Nolimit City was happy to realise Booming Games was sharing the same passion. As a result, Nolimit City is looking forward to a new partnership and a lot of new games in the future.

The Booming Games representative, the CCO Frederik Niehusen, pointed out that the company was proud to partner with Nolimit City. He stated that they were excited to be able to apply xNudg with their new game. As a result, innovative technology has proved to be a great success in providing player entertainment. Niehusen concluded that Booming Games was also looking forward to a great collaboration with Nolimit City.

After two premiers at the beginning of 2021, the globally-acclaimed game developer has released a new slot with a brand new feature. Following “San Quentin xWays” and “East Coast vs West Coast” success, the company had a difficult job to outperform itself.

“Fire in the Hole xBomb” is the first slot with a novel xBomb feature that removes all adjacent symbols. In this way, the mechanic increases the win multiplier by one even if the round is not the winning one.

The game has a 6×3 reel layout with 486 ways to win. When the reel area expands to a 6×6 grid with all 6 rows being active, 46,656 ways to win are in play. The game boasts Lucky Wagon Spins, Collapsing Mine, Wild Mining and the new xBomb feature.

When xBomb Wild symbols explode, they remove the nearby icons to increase a win multiplier by 1 for the next explosion. The luckiest miners are rewarded with the “Big Time” animation, a feature that is triggered if the player reaches the maximum payout of the game: 60,000x.

Speaking of the new release, Per Lindheimer from Nolimit City said that taking a classic mine time and giving it a new twist was a fun experience for the team.