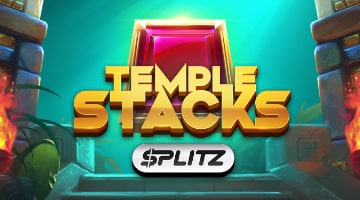 Yggdrasil Gaming, the Malta-based software provider, has unveiled their first Splitz title called Temple Stacks. Announced as the industry-changing mechanics, Splitz feature offers never-before-seen win potential thanks to up to 248,832 ways to win.

Temple Stacks Splitz is an Aztec-themed slot that uses 5 reels. This is the first title that introduces the revolutionary Splitz™ mechanics which transforms the traditional slot layout into reels of infinite potential offering up to 248,832 ways to win. The game invites you to enter the ancient Aztec temple and unearth the riches hidden within it. The graphics are on point as well as sound effects providing players with an air of mystery and anticipation.

During the base game, Splitz can affect any of the reels and reveal from 3 to 9 symbols of a kind. The game comes equipped with two special symbols – Hybrid and regular Free Spins icon. When 2 Hybrid Free Spins symbols hit the reels, they turn Wild and award a respin with the triggering symbols locked in their positions. Land 3 Scatters and you will unlock the Free Spins feature with up to 35 freebies up for grabs.

There are four levels of the feature with each one being more lucrative than the previous one. To unlock each level, you need to trigger free spins four times. Within free spins, Splitz can reveal up to 12 matching icons per reel, which means more winning combinations. The maximum payout stands at 25,000x the total stake.

Although the Splitz mechanics may remind you of Megaways launched by Big Time Gaming, you should not mix these two up. While Megaways introduce up to 7 icons per reel, mystery stacks in the Splitz titles can reveal up to 9 identical symbols per reel in the base game. The number of matching symbols per reel increases to 12 within the free spins feature.

Senior Product Strategist at Yggdrasil Jonas Strandman said that with their Splitz mechanics every spin could generate huge rewards due to thousands of pay ways.

“We couldn’t be more excited to launch our first Splitz title. We eagerly look forward to seeing how the game is received by Yggdrasil fans across the globe,” added Strandman.

Yggdrasil has announced that the next Splitz game will be released on April 23. You can play Yggdrasil slots at Kassu Casino.