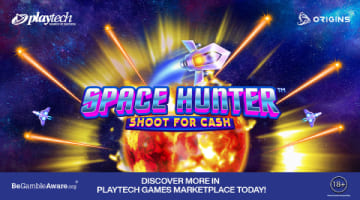 Playtech, a well-known casino content provider, has revealed a brand new product designed for the UK market. The latest release from Playtech’s creative kitchen is called the Shoot for Cash series.

The Shoot for Cash series is the first certified casino shooter game suite tailored for the UK market. The first game to open the series is Space Hunter.

Space Hunt is opening the latest Playtech series. The game is created by Playtech’s content development studio Origins. Space Hunt adds a new spin to a classic slot format by bringing retro arcade-style gameplay into the world of online casinos. Playtech is well known for delivering innovative solutions. So, the Shoot for Cash series is one more to bolster its reputation.

Space Hunter is the first game of its kind allowed in the UK market. The entire game suite, Space Hunter: Shoot for Cash, is a significant opportunity to attract new players, fans of arcade-style classics.

As a unique online casino game, Space Hunt doesn’t use traditional symbols. Instead, during the game, players use power cannons to shot at spaceships. Each spaceship they shoot brings cash rewards. The bigger the ship, the higher payout. The game features Free Shots mode, where cannons have different power levels. Various guns increase the potential for a successful hit. In the end, the Supernova Explosion feature destroys all ships on the screen for a significant win boost.

The game combines the best elements of online casino and arcade games, delivering a highly engaging and exciting gaming experience. We can immediately feel the electrifying atmosphere and adrenaline coursing through player’s vanes. So, Playtech has once more succeeded in providing players a memorable gaming adventure.

Head of Content Unit at Playtech, Eran Gilboa, said that the developer was looking forward to seeing the full potential of the game and the entire shooting series. Arcade-style shooter games are popular among gamers for more than 40 years now. So, enhancing the slots with this popular game style is a recipe for success.

Gilboa also added that the Shoot for Cash concept and game mechanics had been carefully designed to provide the most entertaining experience.

Amir Levy from Playtech’s studio Origins also sad that the Shoot for Cash format and Space Hunter game is a brand new concept. He said that the studio had never worked on such a format, and they were thrilled to experiment and produce something original. He pointed out that they were confident that the game would become a huge hit.

Finally, he said they were proud to deliver a truly original game that appeals to all kinds of players in regulated markets worldwide.