Playson Agrees to a Deal with Parley 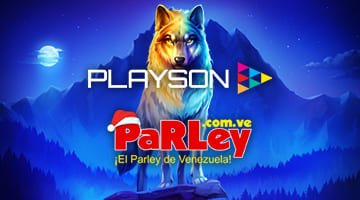 Playson, a cutting-edge online casino content developer, has reached a deal with a Venezuelan operator Parley. Playson will supply the operator with casino games from its impressive slot portfolio. This partnership will allow the prominent supplier to experience stable growth across the Latin American market.

The deal will help Playson bolster its international presence while reinforcing Parley’s online offering. The titles include such popular releases as 5 Fortunator, Solar Queen Megaways and Royal Coins: Hold and Win.

Parley, one of Venezuela’s most notable operators, has already established its status in Latin America. The new partnership will enable the company to grow further, reach new players and cement its position. Teaming with a famous supplier like Playson will help the Venezuelan enterprise enormously. Incorporating Playson’s content will expand the player database and provide more top-notch games to old customers.

The deal underlines Playson’s strength and quality as a developer, for it continues its steady expansion across the region and worldwide. It is a giant step forward towards realizing the provider’s strategy. Latin America is a booming iGaming market, and the enterprise wants to be a vital factor. It is not the only target of their expansion plans, but it represents a seminal jurisdiction. Playson looks to expand its global footprint and strengthen its presence throughout the flourishing Latin American market.

The officials have voiced their unanimous delight about the new partnership, expecting the deal to bring enormous benefits to both companies. Blanka Homor, Sales Director at Playson, has said striking a deal with Parley is a big step towards achieving their goals. Playson believes the quality of their games will attract sufficient interest from multiple markets worldwide, particularly across Latin America. Venezuela is a vital part of Playson’s plans to fortify its foothold in the country and on the entire continent.

Playson is a well-respected iGaming content developer that provides top-quality content in nearly twenty regulated markets. The company has had its rich game library is tested for all the prominent jurisdictions across Europe. However, the supplier doesn’t plan to stop there, securing new partnerships and expanding its game portfolio daily. Before Parley, the firm struck a deal with Magic Bet, an operator based in Bulgaria, reinforcing its European presence.